Keep the Raymore Missouri speeding ticket off your record. 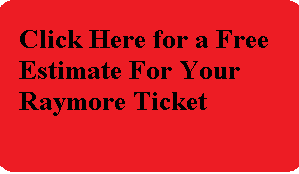 Raymore Missouri Speeding Ticket Information
The Raymore Prosecutor will amend your speeding ticket to a Defective Equipment for a fine of $175 and $275, depending on your speed.  The attorney fee is $150.00.

Generally, you will not have to appear in Court if it is only a speeding ticket.  You must appear for a Driving While Suspended or a Driving Under the Influence.

Court in Raymore is the first and third Thursday of every month beginning at 5:00 p.m.

What If I Already Paid the Raymore Speeding Ticket and Want to Get It Off My Record?
You may be in a situation where your insurance rates have been raised or you are in danger of having your license suspended due to points. If you paid a ticket in Raymore and need to get it off your record, Truman Tickets can help.

This process is called a “Set Aside” which means we are asking the Raymore Judge to set aside your guilty plea (you pled guilty when you paid the ticket). I can then negotiate with the Prosecutor to amend the ticket to a Defective Equipment. The Court then sends the updated information to the Department of Revenue and they take the points off your record. I charge a flat fee of $600.00. This includes the fine and my fee.

General Raymore Information
Raymore is a city in Cass County, Missouri.  Raymore is the one of the fastest growing cities in the state of Missouri, and surpassed the 2007 estimated population of 16,000 by over 1,000. It is a suburb of choice for many people that make the daily commute to Metropolitan Kansas City.

Raymore is the strongest contributor to the Raymore-Peculiar school districts, which also includes students from the surrounding areas of Lee’s Summit, Peculiar, and unincorporated Cass County.

In 1874, Raymore was initially laid out by Rae, Moore, and Leas. Raymore was named after George Rae and H.C. Moore.