Lee’s Summit is a burgeoning municipality, reflected by the number of judges/Prosecutors and court schedule. 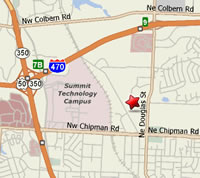 General Information:
The Lee’s Summit Prosecutors are generally amenable to amending tickets. Lee’s Summit provides day and night court which is convenient for many working people. Lee’s Summit will amend to a defective equipment which is a non moving violation and will not be reported on your driving record.

Most speeding tickets do not require a court appearance unless you were caught going over twenty-five miles over the speed limit. If you are under the age of twenty-one, you must complete the Young Traffic Offenders Program

General Lee’s Summit Information:
Lee’s Summit began as a farming community, adjacent to the metropolitan area of Kansas City Missouri. Lee’s Summit is becoming one of the busiest centers in the Kansas City Metro region, and is home to more than 80,000 residents. Lee’s Summit maintains much of it’s “old time” charm with the historic downtown. But as evidenced by the new schools and the impeccable courthouse, Lee’s Summit is also taking many new steps forward.