With highways all around, Clinton increases it’s numbers of traffic citations issued every year. 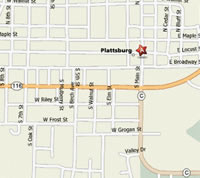 General Information:
Clinton County has very friendly Prosecutors who will deal with all the various driving infractions. Clinton County is situated in one of the oldest and most historic courthouses in the state of Missouri. It is truly a beautiful courthouse complete with a “town square” with quaint shops and restaurants. The Prosecutor will amend a ticket to a defective equipment which is a non-moving violation and will not be reported to the Department of Revenue.

Why Hire a Lawyer for your Clinton County Speeding Ticket: There’s a lot of reasons – a big one is your insurance will go up. Click here is all the information you need to know.

Costs:
A defective equipment will cost you between $200.00 and $275.00. My charge for Clinton County is $150 per ticket. You will be able to pay in cash or through PayPal. All money for fines and my fee must be paid upfront. For more information on how the process works, please go to About Us.

Court Schedule:
Court is on Tuesday mornings in Clinton County.

General Clinton Information:
Clinton has an interesting Yankee slant to it’s history. The county was organized in 1833 and named in honor of the first Governor of New York and the first Vice President of the United States to die in office, George Clinton (vice president).

The town was the long time home and is the final resting place of Senator and “President for One Day” David Rice Atchison. According to the legend, Atchison technically was President of the United States for one day-Sunday, March 4, 1849. Outgoing President James Polk’s term expired at midnight, the morning of March 4, and his successor, Zachary Taylor, refused to be sworn into office on the sabbath (Sunday). Taylor’s Vice Presidential running mate, Millard Fillmore, likewise was not inaugurated. As President Pro Tempore, and therefore Acting Vice President, under the presidential succession law in place at the time, Atchison was believed by some to be Acting President.